A number of residents have contacted me about the incoming resident parking scheme (RPS) changes being introduced in parts of St Peters, Tempe and Sydenham in early 2018. Here's a summary of the main queries and answers, much of which has been gleaned from Council staff.

The following table has been drawn from the minutes of Council's Traffic Committee meeting of 5 October 2017, which was passed by Council at our Ordinary Meeting on 24 October 2017. 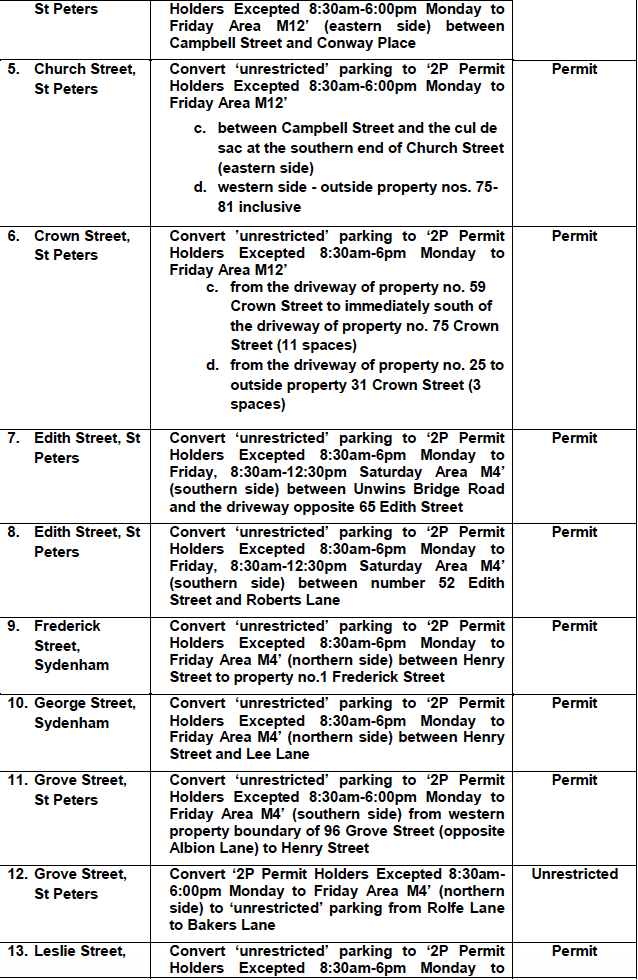 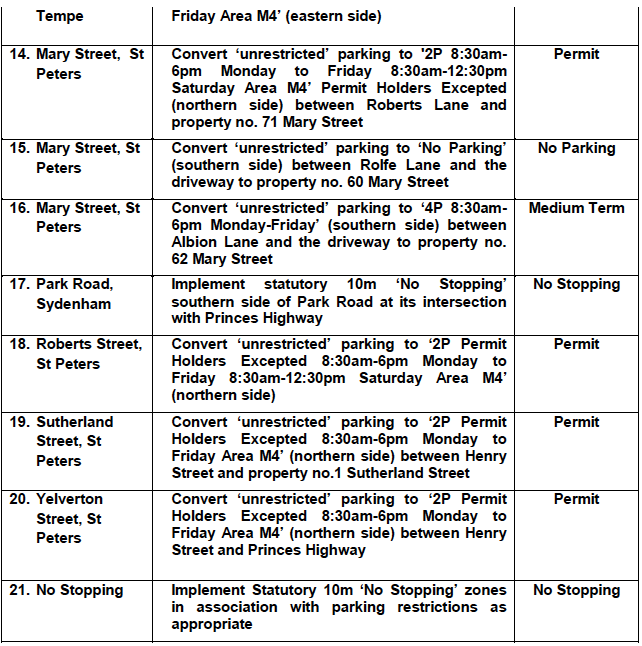 When will the new changes come into effect?

The current plan for the completion of St Peters/ Sydenham parking scheme changes is as follows:

They become operational as soon as the signage is installed however it is normal practice to give a grace period of 2 weeks after installation before enforcement is commenced to ensure sufficient time for necessary permits to be obtained.

Why weren't parking restrictions introduced in my street / on both sides of my street?

Generally a continuous parking occupancy level of 85% (or close to it) throughout the day, attributable to other than just residents parking, is taken as the threshold.

With some exceptions, a new resident parking scheme (RPS) is generally provided to one side of the street fronting residential properties. Parking restrictions on the alternate side are generally left unchanged to cater for long term parking for visitors, residents not participating in RPS, service vehicles, multiple car ownership, patrons to nearby commercial areas etc.

A resident parking scheme has been recommended for Edith Street primarily due to impacts of operation of the commercial Precinct 75 contributing to high on-street demand for parking.

Silver St and Florence St are examples of streets where no change to the existing unrestricted parking has been recommended. The main demand for parking occurs from late afternoon/ evening indicating it is most likely caused by resident returning home after work etc. A resident parking scheme would not moderate that demand.

What if I think my street should have had an RPS?

For any new precinct schemes (such as St Peters) we generally plan for a review after at least 12 months of operation to identify any unforeseen knock-on impacts after parking patterns have settled. For individual streets we can program a review if circumstances warrant and there is a high level of resident support for an RPS.

For the former Marrickville area this was demonstrated by receipt of requests from at least 10 households in the street (either by letter or petition).

If a parking occupancy survey indicated there is a significant change in the parking characteristics warranting consideration of a RPS we would then proceed to resident consultation.