I was contacted in late February by residents in Lord St Newtown who had discovered they had an ‘unregistered dealing’ on their land titles as a result of unfinalised acquisitions of land under their properties for the Sydney Metro project. This has stopped some residents from refinancing or even selling their homes, with no resolution in site - which is why I'll be moving that Inner West Council writes to the relevant Ministers to demand urgent action at our meeting next week.

I spoke to Ten Eyewitness News about this issue on 7 March 2018.

Here's the motion I'll be bringing to Council if it's not resolved:

1. Act urgently to ensure the removal of the reference to an ‘unregistered dealing’ that now sits on the land titles of residents in Lord St Newtown as a result of substratum acquisitions that took place under their properties for the Sydney Metro City and Southwest project; and

2. Enact measures that would allow residents who have suffered negative financial impacts as a result of this issue to be fairly compensated for their losses.

I was contacted in late February by residents in Lord St Newtown who had discovered they had an ‘unregistered dealing’ on their land titles as a result of unfinalised acquisitions of land under their properties (substratum) for the Sydney Metro City and Southwest tunnel.

This is despite some residents having received written notice that the resumption of substratum on their properties is complete.

As long as this issue remains unresolved, it will impact Lord St residents who try to sell or refinance their homes, as well as prospective buyers, as the ‘unregistered dealing’ creates a risk for banks and other mortgage lenders.

This situation has already negatively impacted residents. One resident who contacted me was unable to refinance his mortgage at a significantly cheaper rate with a new bank due specifically to this issue. Another resident recently tried to sell his home, and was told at least one prospective buyer had their loan application rejected due in part to this issue.

Residents were initially told that the recently privatised NSW Land Registry Services (LRS) was waiting on information from Transport for NSW (TfNSW) before it could finalise the titles. However, residents have subsequently been told TfNSW has supplied this information, but LRS has yet to process it (see Attachment 1).

Whatever the cause, this issue must be resolved as a matter of urgency. I have contacted the Project Director of the Sydney Metro about this issue, and Newtown MP Jenny Leong has also written to the Minister for Transport and Infrastructure to ask for urgent action. At the time of writing, the problem is still yet to be resolved, which I why I am moving that our Council adds its voice by advocating on behalf of our affected residents. 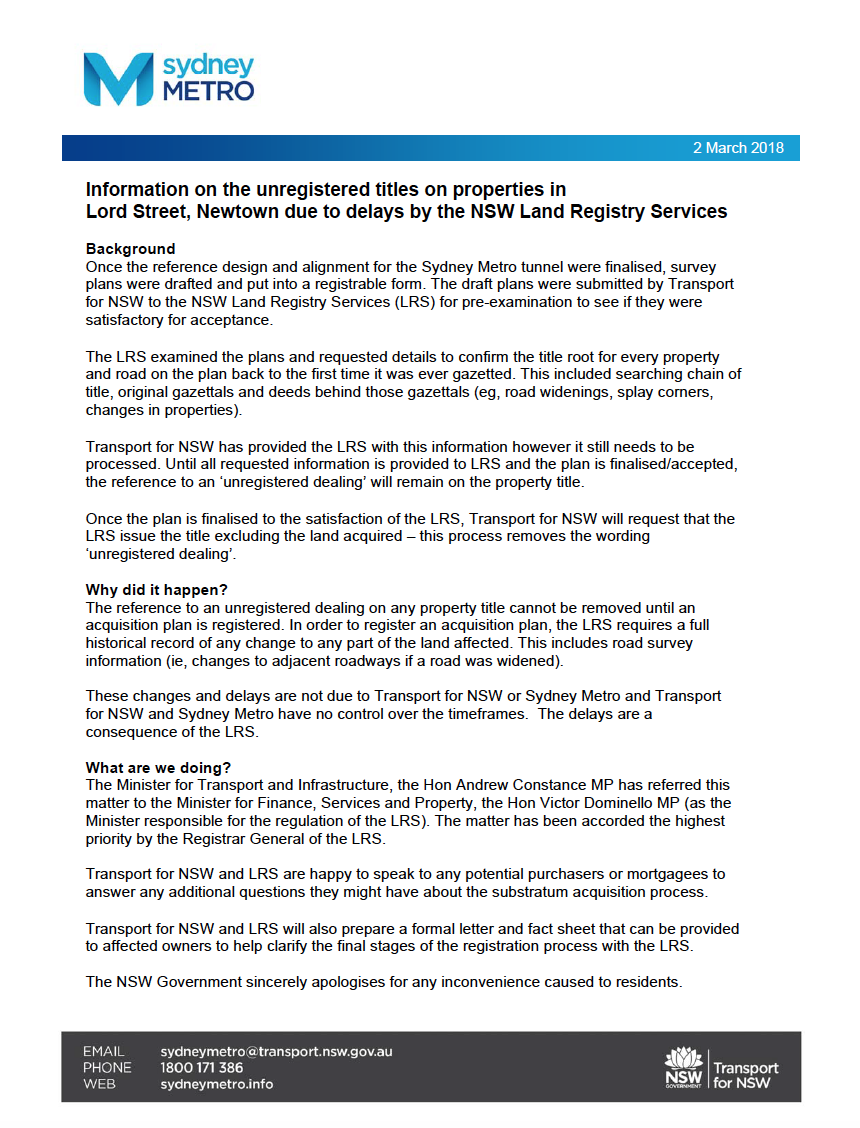