Fear and loathing on the campaign trail, part 2

In the second instalment of this series, Pauline tackles the distraction tactics and smear attempts she’s coming across as an independent candidate in the Inner West Council election. This time, it's Labor folks mucking around with smear tactics.

I’m hearing whispers from within Labor that attempts will be made to paint me as a “Greens front” during the Inner West Council election campaign, rather than the genuine independent I actually am. This wouldn't be the first time that's happened.

Even though I've never stood as a political candidate before, I’ve been fending off accusations of being a Greens front from Labor for years – since the state election campaign of 2015, to be specific.

This excerpt from a much longer tweetfest with current Inner West Council mayoral hopeful Darcy Byrne is one example, but it’s not the only one (though he may be the highest ranking Labor member to make these accusations in such a public fashion). 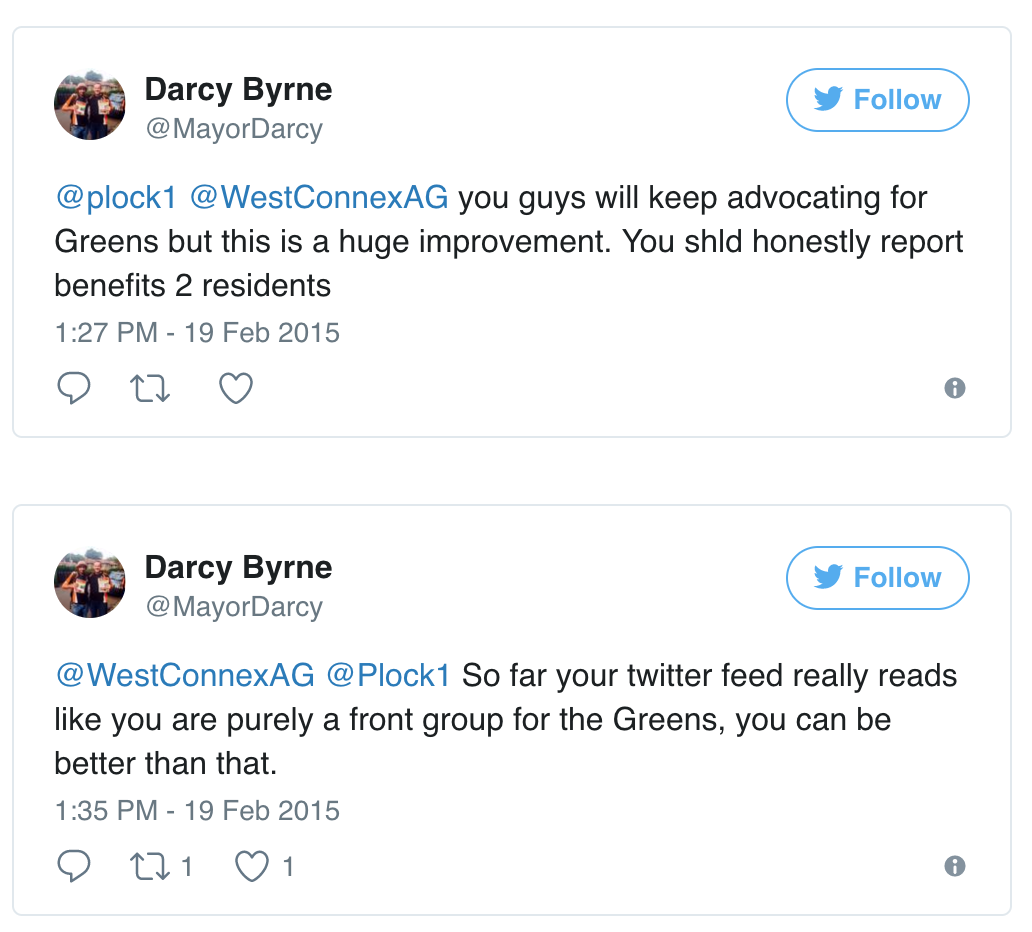 Excerpts from a longer exchange you can view here.

As you can see, there’s an overlap in comments being addressed to me and to the WestCONnex Action Group (WAG), which I helped found. WAG has also been accused of being a Greens front, though it’s never actually endorsed a candidate or party.

What WAG has done – and been very open about – is make each of the parties’ stance on WestConnex very clear come election time. I can imagine how that might have riled Labor candidates who were keen on promoting themselves as being opposed to WestConnex in inner west seats, despite their party policy openly supporting much of the tollway. 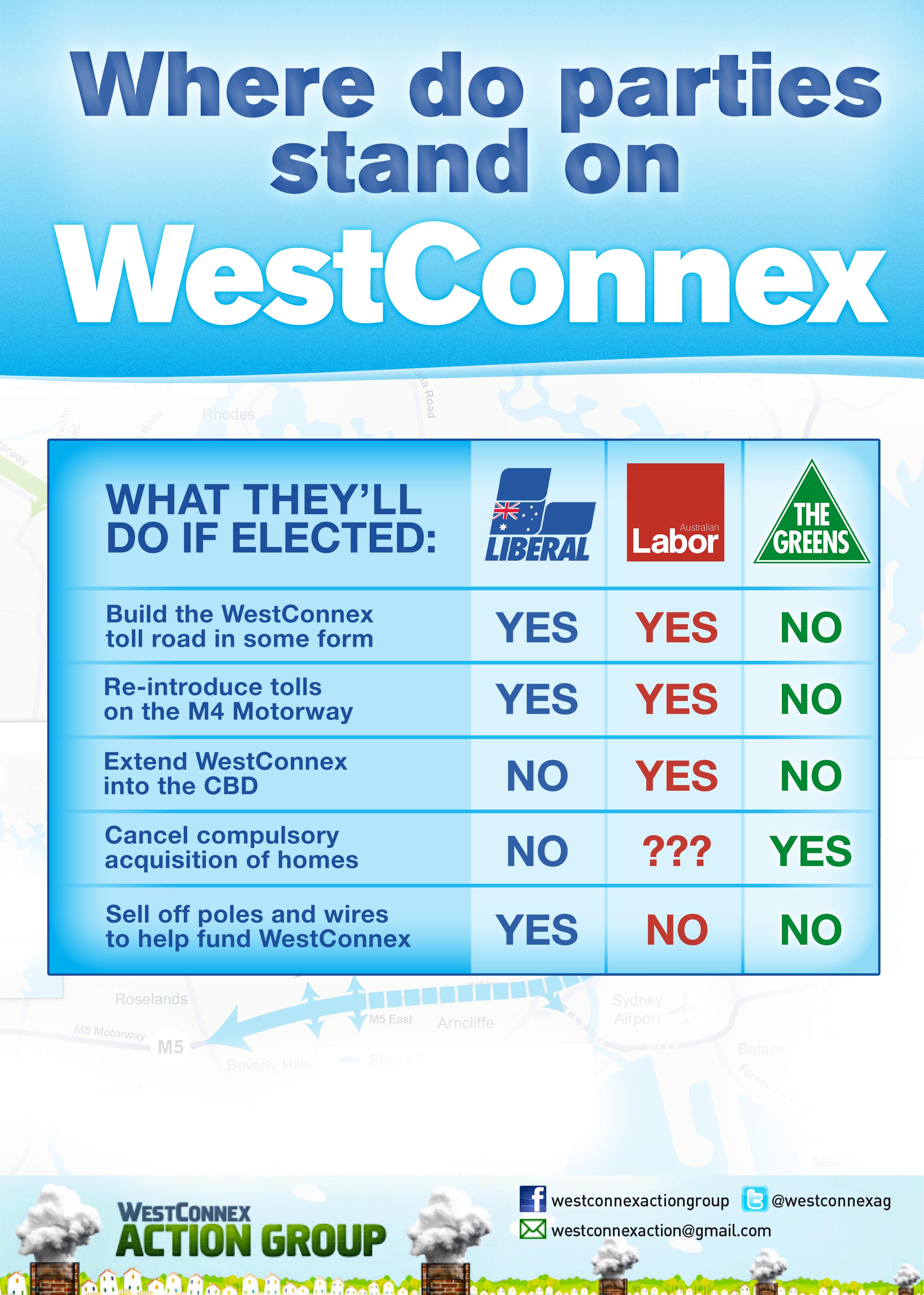 As I said to Darcy back in 2015 – in as many words as Twitter’s 140-character count would allow – between campaigning against WestConnex, fighting for compensation for my family's forcibly home, and advocating for the many residents who were coming to me and WAG in distress about the impact WestConnex was having on their lives, I barely had time to front my own life, let alone a party. 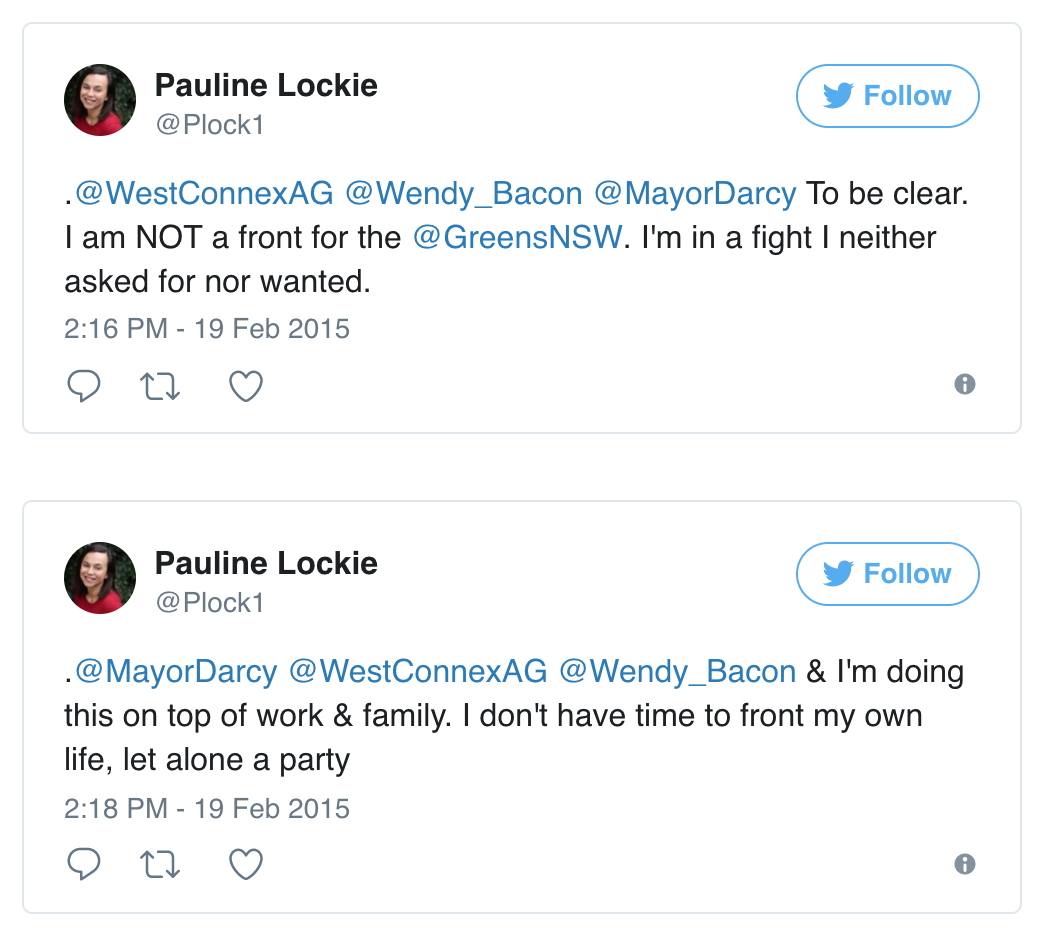 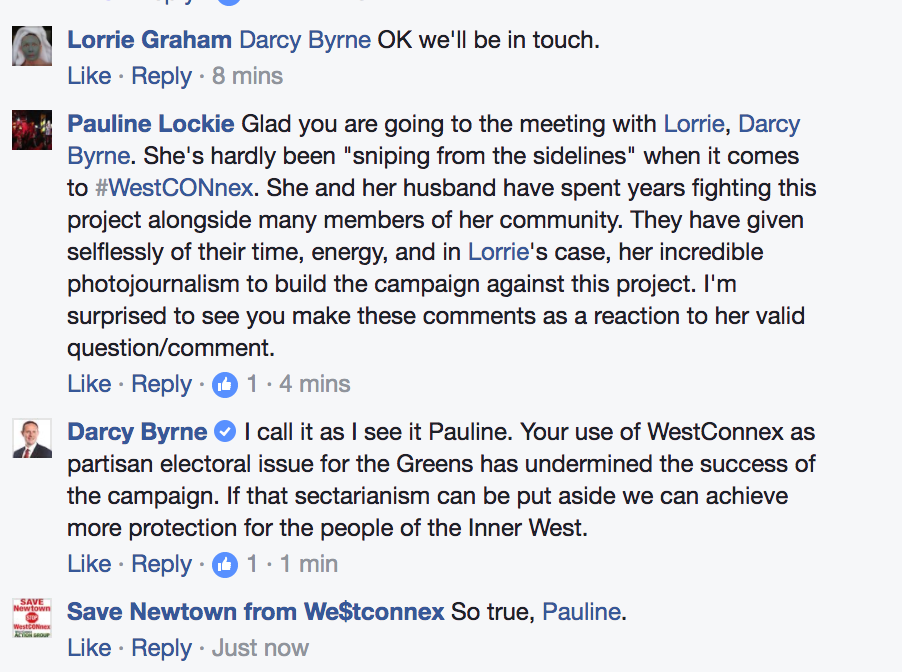 The simple fact is I’ve never been a member of the Greens, or any other political party. I’ve come to know, like and respect many Greens members over the years. But the same can be said of friends who are members of the Labor party, the Clover Moore Independent Team, the Australian Cyclists Party, and no doubt others.

I suspect one of the real reasons Labor’s keen to accuse independents of being fronts for other parties is because they’ve been linked to running front candidates themselves. In fact an old friend of mine who ran as an independent some years back asked me who was funding my campaign; when I said I was, she was surprised, because her campaign had been funded by Labor to draw votes away from a candidate in her area.

Accusing rivals of being fronts is also a classic diversion tactic used by the major parties to distract people from their unpopular, donor-driven policies – such as the fact that Labor supports much of WestConnex even as it’s tearing the inner west apart.

This is why I’ve chosen to run as an independent. With everything that’s happening in the inner west right now, it’s crucial for us to have strong voices on our council who are prepared to stand up for our community, and not be compromised by lousy party policy.