The loss of our industrial lands in the Inner West has become something I've become increasingly interested in at Council. We have such a rare and vibrant industrial area in and around Marrickville, but it's now under increasing threat from gentrification, development, and the desire of some to be seen as champions of the creative industry no matter the cost.

A recent (excellent) report by Jacob Saulwick in The Sydney Morning Herald looked at the Sydenham Creative Hub, an initiative championed by the old Marrickville Council and Labor in particular.

On paper, it sounds great: a way to bring live music and creative businesses to old industrial land in Marrickville.

Problem is, that "old" industrial land isn't actually so old. It's heavily used, with vacancy rates estimated by our staff to be as low as 1-2%, including many businesses that could already be classified as "creative". It generates local jobs that often can't be located anywhere else, particularly as city-based industrial land is increasingly rare (and will become more so as proposals such as Victoria Rd, Sydenham-Bankstown and potentially Precinct 75 go ahead).

Inner West Council recently received a damning report into the economic impact of the current proposal from SGS Economics and Planning, and the first recommendation was that we shouldn't introduce any additional uses into most of the proposed Sydenham Creative Hub area, as this would place the existing industrial uses under threat.

The report doesn't go into the reasons why this would threaten the industrial uses, so I spoke to staff from our strategic planning area to find out why. Turns out there are a few reasons why introducing additional businesses such as live music venues and bars into industrial areas ends up driving the existing businesses out. They include:

This is why our staff are recommending that we adopt a new proposal that would save these vital industries, while bringing small bars, nightlife and footpath renewal between the station and Marrickville's retail centre.

If this is an area that interests you, I strongly encourage you to give the SGS report on the Sydenham Creative Hub proposal a read - and bear in mind that it was written by people with no political skin in the game.

UPDATE 13/12/17: At last night's Council meeting, we voted to proceed with the recommendation of our Council staff to reduce the size of the Sydenham Creative Hub to retain the existing industrial land, while enabling the renewal of the somewhat neglected strip between Sydenham station and the Marrickville retail centre.

I voted for this proposal, as I believe it's the best way of saving our precious industrial space while allowing new live music venues, small bars, and upgrades that will enhance pedestrian safety and access to be added to the area.

Labor councillors moved an alternative motion to defer the item and continue to explore ways bars and live music could be added to a new area within the precinct. As much as I would have loved to support this, the evidence presented by the SGS report, and the discussions I've had with Council staff and business owners in the area, made it pretty clear that adding any additional uses within the industrial area would threaten the businesses.

And I've been told by Council staff that the uncertainty surrounding this area's future is already impacting industrial tenants there, with reports that some businesses have had problems attempting to renew leases. That's why I didn't want to vote to keep delaying this when we have firm evidence that favoured the revised option staff proposed.

As I said above and last night - the original Sydenham Creative Hub sounds great on paper. But unfortunately, the evidence for it just doesn't stack up.

Probably won't stop the political games around this, though. 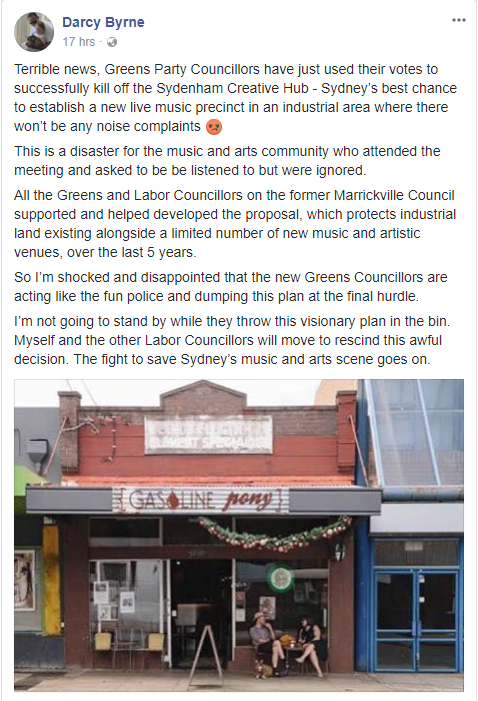 UPDATE 14/01/18: This came back to Council at our meeting last night, after the Labor councillors led by Mayor Darcy Byrne moved a rescission motion to overturn our decision from December. The rhetoric at times got quite ugly, with insults lobbed at both the SGS consultants that Council had commissioned to analyse the proposal's economic impact, as well as a local business that had lobbied against the proposal.

No new evidence was presented to counter the SGS report, which reflected the concerns both local businesses in the existing industrial precinct and Council staff and the Marrickville Business Chamber have been raising for years. The motion was lost.

There were a lot of musicians and live music advocates in the gallery for the debate who were hugely disappointed by the decision, and I don't blame them. As I said in the Council chamber last year, it's shocking that the proposal was allowed to go so far, and for so long, before an any in-depth analysis of its economic impact was done. And even then, this study was only undertaken because the NSW Department of Planning ruled that it needed to happen before the project could proceed.

Our staff will now go on to the next stage of developing plans for public exhibition later this year, and I look forward to sharing that with you then.